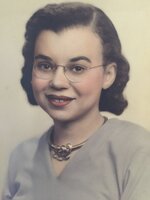 Corinne Gwendolyn Hinds Obituary May 27th, 1915 – June 12th, 2022 On June 12, 2022, at approximately 7am, Corinne G. Hinds (neé Craig) passed away peacefully at the age of 107. Corinne was predeceased by her parents, Jesse and Bessielene Craig, her brother Cornelius, her first husband Edward Petty and second husband Charles C. Hinds. Her beautiful spirit lives on in her daughter Kuta Hinds and partner Rob Morales, son Aaron Keith Hinds and wife Christin Hinds, step-daughter Patricia Gail Hinds, grandchildren Isabella Morales, Duke Morales, Lucas Hinds and Sasha Hinds as well as a large loving extended family. Corinne was born on May 27th, 1915 in Gallipolis, Ohio. During her formative years, Corinne and her family lived in several towns in Illinois, including Joliet and Aurora. As a young adult, being blessed with a natural talent for music, Corinne studied at the Joliet Conservatory of Music. She played the piano at an expert level and also sang at her church. She studied nursing for a time and then steno-typing. She met and married acclaimed jazz musician and businessman Edward “Prince” Petty. They remained together for over 30 years until his passing in 1972. After moving to New York, Corinne worked as an executive secretary and then became a bookkeeper for Macy’s at Herald Square. She eventually met and married her second husband of nearly 40 years, Charles C. Hinds. As a devoted woman of faith, Corinne completely dedicated herself to St. Mark’s United Methodist Church in Harlem, NY for several decades where she was Treasurer and President of the church's credit union as well as the financial chairperson of the church. Additionally, she was President of the United Methodist Women’s organization for over 12 years. Corinne and Charles settled in Staten Island, NY where they raised Aaron Keith and Kuta. They became members of Faith United Methodist Church in later years where Corinne took the role of Treasurer of the Board of Trustees and Secretary of the Finance Committee among other responsibilities. From shortly after her husband’s death until her own passing, Corinne resided in Weehawken, NJ with son Aaron Keith and his family. Corinne always enjoyed the outdoors and tending to her large garden. She was an excellent cook and also spent many hours sewing. Corinne was known as a woman of great strength and character. She will be deeply missed by all who knew her. An in-person memorial service will be held on Saturday, July 30th at Faith United Methodist Church, located at 221 Heberton Ave, Staten Island, NY 10302, beginning at 11 am with her burial to follow at Woodrow UMC, located at 1075 Woodrow Rd, Staten Island, NY. In lieu of flowers please send a donation to her last longtime church home via check, payable to “Faith United Methodist Church”, mailing address is: 221 Heberton Ave, Staten Island, NY 10302 or make a donation to the ASPCA as Corinne was a devoted animal lover.